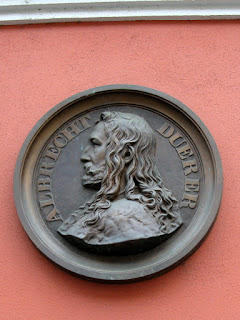 Well, we have been here just over a week now. We arrived at 7AM and made it to Bad Kissengen around 9, freshened up and went out for a walk. Bad Kissengen is a Spa town with mineral water springs in northern Bavaria, Germany. We strolled down town for a cup of coffee and pastry and then meandered home.
It is on this walk home that I may have missed out on a fine opportunity for making use of my limited German skills. Strolling through a park downtown we came across a fountain from which the locals were drinking the strong mineral water. Cara and I cupped some water into our hands and tasted the strong stuff. We strolled along and drank from what appeared to be a similar fountain, the spigots were the same, though the water turned out to not be mineral. A minute or two later my subconscious notified me that the translation of the small sign next to the most recent fountains were available. The sign said Kein Trinkwasser which, as it turns out, means Not Drinking Water. Needless to say, I spent the next three days with a stomach flu, Cara was unaffected. Granted, it is entirely possible that something else poisoned me, but THAT was the only think I consumed that was explicitly labeled as unfit for human consumption.

I did eventually recover so the four of us (Cara's mother and Ray included) hopped in the car and drove east to Nuremberg and then into the Czech Republic for two nights in their capital city of Prague. Both of these cities were fantastic. Kathryn's GPS did an amazing job of leading us through winding ancient streets. It was perhaps a bit too ambitious when it tried to lead us through the Old Square of Prague at 3PM, on a Saturday, on the hour. "On the hour" is important here. There is a mechanical Astronomical Clock in the square that puts on a small show on the hour. Every guide book for Prague tells every single tourist to go stand directly in front of it and wait for it to ring the hour. They were all there that beautiful afternoon. Thousands of them waiting for the clock. Needless to say, our glorious drivers kept their cool far better than I would have and backed us out and weaved around the square and we found the hotel.
There are two things worth noting. Sunday at 9AM in late May you might pass through the square with ease, though the GPS company should probably eliminate that as a route to be safe. The next thing is, it is possible to drive into Prague but it won't do you any good when you get there. Stay on the arterial roads. Park at the Palladium shopping mall for a few days. Get rid of the car.
We took only a few photos on this trip, the album is online here.
Posted by Austin at 9:00 AM No comments: